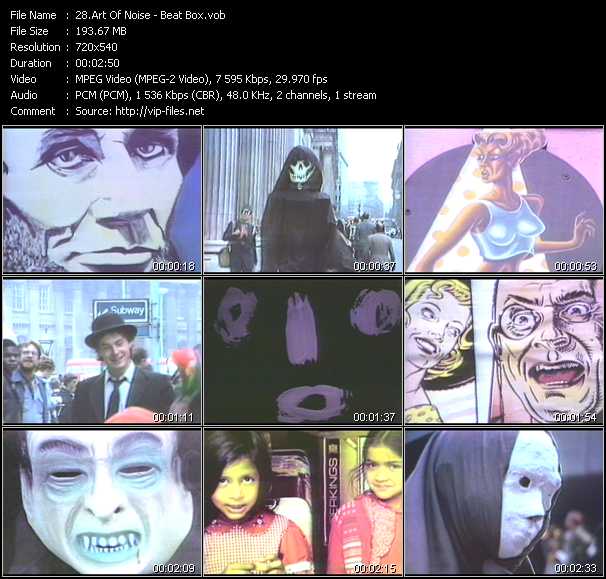 Other Pop-Music Videos of Art Of Noise

Art Of Noise video Close (To The Edit)

Art Of Noise video Close (To The Edit) (Animated Version)

Art Of Noise video Close (To The Edit) (Animated Version)

DVD: Now You Can See The Music

The Art Of Noise, an art-pop group established in 1983, scored hits with "Beat Box", "Close (to the Edit)", "Moments in Love", "Paranoimia", and cover versions, with guest performers, of "Peter Gunn" and Prince's "Kiss". Often cited as a pioneer in commercial electronic music and sampling, The Art Of Noise used technology to rework the same recordings many times over, a novel approach at the time. Although only a relatively small amount of original material was commercially released during the project's active periods (1983–1989 and 1998–2000), the Art Of Noise's legacy includes scores of reissues, remixes, and compilations of previously released and unreleased material. The Art Of Noise began as a project of studio engineer Gary Langan and Fairlight sampler whiz J.J. Jeczalik, who were working together with producer/performer Trevor Horn and pianist/composer/arranger Anne Dudley on several of Horn's productions for other artists. Writer Paul Morley was brought in to tailor the group's image, which was at first that of a faceless "non-group" inspired by early 20th Century modernism. An acrimonious split in 1985 left Art Of Noise as a trio, sans Horn and Morley, and with a more tongue-in-cheek musical direction. Langan moved on amicably in 1987, leaving Dudley and Jeczalik to carry on until they, too, called it quits in 1990. In 1998, Horn, Dudley and Morley temporarily reformed The Art Of Noise with the addition of guitarist Lol Creme. The resulting album, The Seduction of Claude Debussy, was another attempt to raid the 20th Century's musical forms, this time focusing on the life and work of longtime influence Debussy. The group went dormant again in 2000. The name The Art of Noise comes from the Futurist artist and composer Luigi Russolo (1885-1947) manifesto "The Art of Noise", as a tribute his portrait silhouette is also show on the 12"sleeve of Legs.