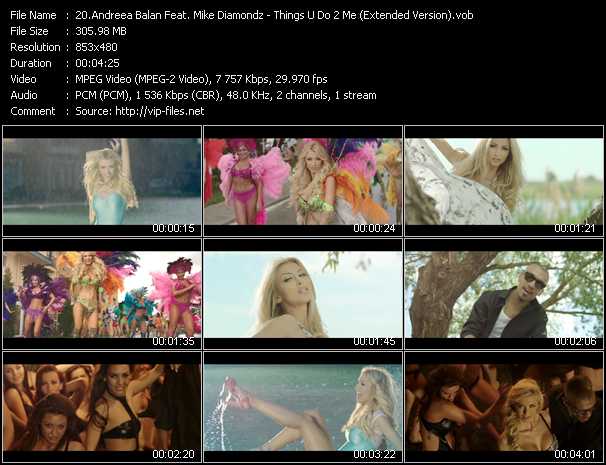 Things U Do 2 Me (Extended Version)
MPEG-2 video VOB

Other Pop-Music Videos of Andreea Balan

Andreea Balan video Crazy About You

Romanian singer, producer born in Bucharest, February 26, 1983 from Congolese parents. His parents were living in Romania at the time completing their university studies. The family moved back to RD Congo while Mike was still very young, however, he spent almost his entire childhood there, getting in touch with his roots. In 2006 joined with Tom Boxer and founded Dream City band. Later in 2011 he left Dream City to solo career.

Romanian pop singer born in 23 June 1984 in Ploiești, active since the late 1990s when she partnered up with Andreea Antonescu, daughther of Săndel Bălan and were nicknamed "The Queens of Romanian Dance Music" when their releases such as "Libera La Mare" went platinum in Romania, Moldova, and the Ukraine. In 2001, Andreea Bǎlan went solo and released songs still in the pop genre such as "Te Joci Cu Mine", "Te Iubesc", and "Libera Din Nou". By 2004, Andreea Balan decided to take a different genre, one with more Romanian heritage and modernized sound. "Prinde-Ma, Aprinde-Ma" and "Aparente" still gained her great success and "Nopti De Vara" was no exception. In 2007, she represented Romania in the International Dance Competition "Bailando Por Un Sueno, Primer Campeonato Internacional de Baile" in Mexico with Petrisor Ruge, and ended in the second place position. During the competition she performed her new single "Baby, Get Up And Dance" and announced her "Greatest Hits" compilation release in Mexico in Spring 2008 under EMI Mexico. "I want to entertain people, I live to be an entertainer. I'm the happiest when I'm on stage, that's my magical world where I can tell my story, the story of how dance and music can come together and make you happy" - Andreea Bǎlan