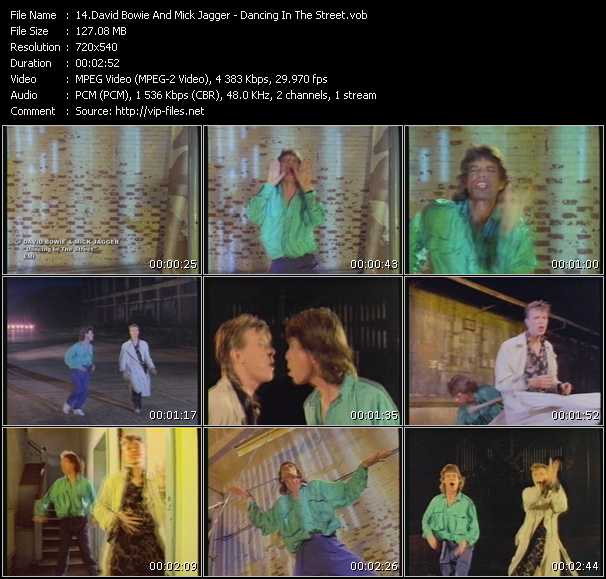 Other Pop-Music Videos of David Bowie

David Bowie And Mick Jagger video Dancing In The Streets

David Bowie video Starman (From Top Of The Pops)

David Bowie video Be My Wife

David Bowie video As The World Falls Down

British pop/rock singer, musician, songwriter, and actor. Born: 8 January 1947 in Brixton, London, England, UK. Died: 10 January 2016 in Manhattan, New York City, New York, USA (aged 69). Bowie is recognized as one of the most respected contemporary musicians of his period. Inducted into Rock And Roll Hall of Fame in 1996. Father to Duncan ZH Jones. For a list of all band and group involvement, please see David Robert Jones.

English musician, singer, songwriter and actor, born 26 July 1943 in Dartford, Kent, England, UK. Founding member of The Rolling Stones. Older brother of Chris Jagger. From 1966 to 1969, he had a relationship with Marianne Faithfull. After his relationship with Faithfull ended, Jagger pursued a relationship with Marsha Hunt from 1969 to 1970. He was married to Bianca Pérez-Mora Macias (12 May 1971 - May 1978) who gave birth to Jade Jagger. During his marriage to De Macias, Jagger had an affair with then-Playboy model Bebe Buell from 1974 to 1976. In late 1977, he began dating American model Jerry Hall. They attended an unofficial private marriage ceremony on 21 November 1990. The marriage to Hall and the marriage ceremony were declared invalid, unlawful, and null and void by the High Court of England and Wales in London in 1999. Father of Elizabeth Jagger, James Jagger and Georgia May Jagger (with Hall). During his marriage to Hall, Jagger had an affair with Italian singer/model Carla Bruni, from 1991 to 1994. He had a relationship with fashion designer L'Wren Scott from 2001 until her suicide on 17 March 2014.

Dancing In The Street - Matt Bianco

Dancing In The Street - Martha And The Vandellas

Dancing In The Street - Myra

Dancing In The Street - Martha And The Vandellas

Dancing In The Street - Nikki Webster