Frisco Vs. Ice MC video VOB Think About The Way 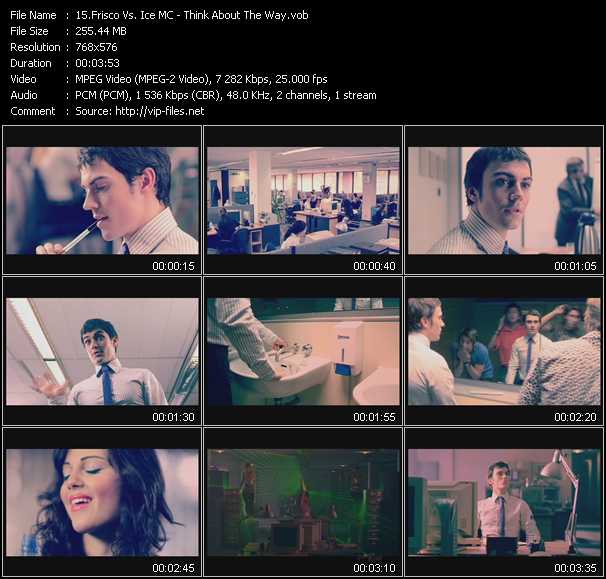 Other Pop-Music Videos of Frisco

Frisco Vs. Corona video Rhythm Of The Night

ICE MC aka Ian Campbell, grew up in the area of Nottingham called Hyson Green. When he was in high school his initials IC quickly got him a nickname ICE (lately he interpreted it as Ian Campbell Esquire). After leaving school he hung around Nottingham for a couple of years until in 1983 he joined a group of breakdancers and started touring Europe with them. In 1989 in Italy he met Roberto Zanetti - singer, composer (as Savage), and producer (as Robyx). Their first single called "Easy", made in a hip-house style, came out in 1989. It became successful all over Europe, reaching the top 5 in Italy and the top 3 in Germany. The two next singles, "Cinema" and "Scream", and the subsequent debut album, "Cinema" (released later in 1990), were also very successful. In 1991 his second LP, "My World", came out but failed to achieve the success of its predecessor due to the fact that hip-house had ceased to be popular. His third album, Ice'n'Green, was released in 1994 and featured Alexia on vocals. Three of his most successful songs, "Think About The Way," (also featured in the soundtrack to the 1996 film Trainspotting), "It's A Rainy Day" and "Take Away The Colour", made the charts all over the world. Ian now got a new look and new style: raggamuffin. The album was also released in the US where the two biggest singles saw substantial club play and moderate dance music radio airplay, thus becoming hits. In 1995 "Ice'n'Green - The Remix Album" was released. This contained various remixes of previous hit singles.In 1996 a new album called The Dreadatour (produced by Masterboy) was released. The hit from the album was "Give Me the Light”, At the end of 2002 he decided to return to Italy. Ice and Robyx started writing some new material and at the beginning of 2004 began recording a new album. The new album, "Cold Skool" was released on April 19, 2004 on Time Records).

Deshane Cornwall (30 December 1982), better known by his stage name Frisco is an English rapper from Tottenham, North London. He is a member of the Boy Better Know collective and CEO of The Den. Frisco first recieved attention after his legendary battle with Grime artist Wiley in Ayia Napa, Cyprus in 2003. Frisco gained further recognition for his appearance in the 2005 single “Private Caller” produced by Skepta.