Isley Brothers Feat. Ronald Isley Aka Mr. Biggs video VOB What Would You Do 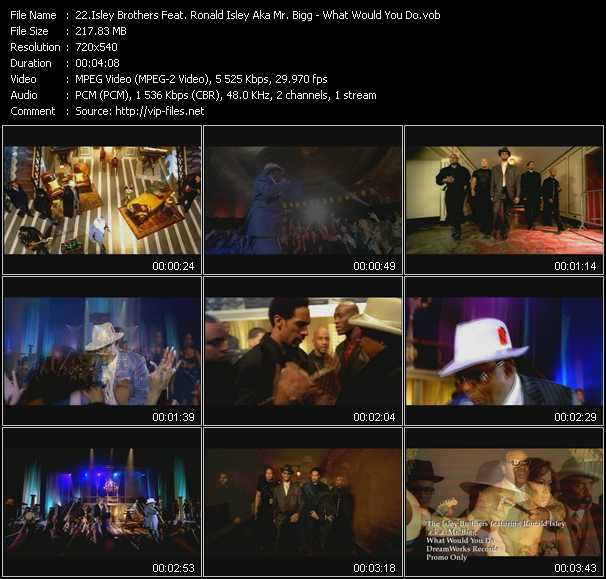 What Would You Do
MPEG-2 video VOB

Other Pop-Music Videos of Isley Brothers

Isley Brothers video It's Your Thing

American R&B/soul group from Cincinnati, Ohio, established in the early 1950s. O’Kelly Isley, Rudolph Isley, Ronald Isley and Vernon Isley (died 1956 in automobile accident) comprised the original group. They released their early hit “Shout!” in 1959. In 1963 they started own label T-Neck, and added a young Jimi Hendrix on lead guitar. In 1965 they signed on to Motown where they recorded “This Old Heart Of Mine”. They left Motown in 1968 and re-launched the T-Neck label in 1969 when they released “It's Your Thing”. In 1973 they added the younger brothers Ernie and Marvin Isley, as well as O’Kelly's brother-in-law Chris Jasper to their regular lineup. During this era from 1973 to 1983 the group continued to release hits like “Between the Sheets”, “Choosey Lover” or “For the Love Of You”. Inducted into Rock And Roll Hall of Fame in 1992 (Performer).

For the Reggae artist, please see Mr. Biggs Mr. Biggs is introduced by a Dutch interview single incl. in a book For the a/k/a of Ronald Isley of The Isley Brothers, please use Mr. Biggs.

What Would You Do - City High