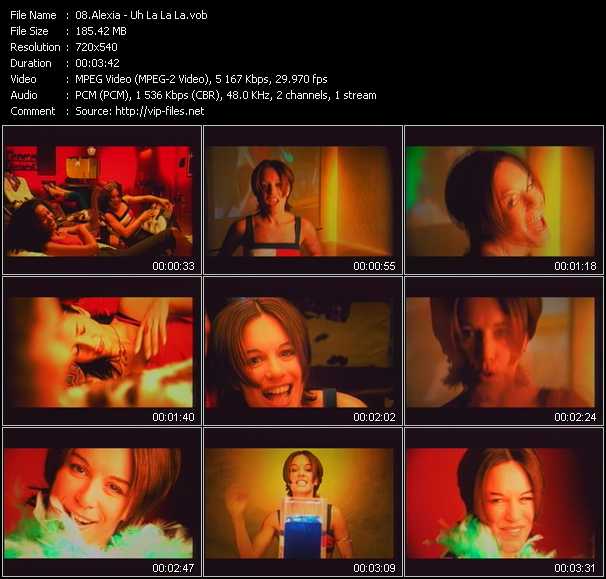 Other Pop-Music Videos of Alexia

Former Eurodance singer born in La Spezia, Italy, May 19th 1967. She began her professional career at the end of the 1980's on the label Euroenergy (a sub-label of Discomagic). She released a few records under different aliases, such as 'Alexia Cooper' and Lita Beck. Also in this period, she began to work with Roberto Zanetti AKA Robyx. Their collaboration began to be fruitful when they embarked on Roberto Zanetti's label: DWA (Dance World Attack). Alessia was remarked when she sang backing vocals on 'Please Don't Go' by Double You. Between 1992 and 1994, she was involved in many projects such as DiGiLove, Cybernetica, Due, Galactica and Fourteen 14. In the same period, she collaborated as the backup vocalist for ICE MC. In August 1995, she started her solo career as Alexia with the single 'Me & You'. A succession of hits began for her: 'Summer Is Crazy', 'Uh La La La' and 'Number One' led to her full length debut album 'Fan Club'. Her second album, 'The Party', was released in 1998 and sold 500 000 copies. Three singles were taken out of it: 'Gimme Love', 'The Music I Like' and 'Keep On Movin'. 2000 saw the release of her last collaboration with Robyx: the album 'Happy', very popular in Italy and Asia. After a final 'Greatest Hits' compilation, she announced that she wanted to try different musical styles. Her fourth studio album, 'Mad For Music' was released to Italian audiences in June 2001.