Swv video VOB You're The One 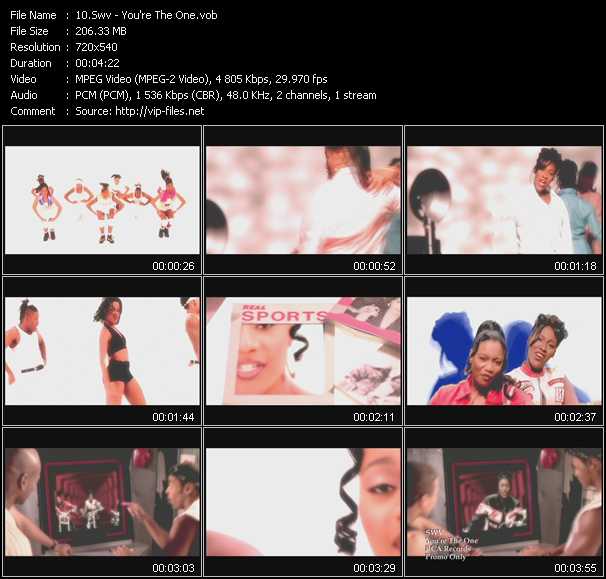 You're The One
MPEG-2 video VOB

Other Pop-Music Videos of Swv

Swv video It's All About U

Swv video You're Always On My Mind

Swv video You're The One

Swv video I'm So Into You

Female R&B trio featuring Cheryl “Coko” Gamble, Tamara “Taj” Johnson, and Leanne “Lelee” Lyons. The all-female new jack swing trio scored a string of Top Ten R&B hits that established them as one of the most popular urban R&B groups of the 90s and founder members of R&B. SWV (their name is an acronym for Sisters With Voices) is comprised of three school friends: Coko (born Cheryl Gamble), Taj (born Tamara Johnson), and Lelee (born Leanne Lyons). All three vocalists sang in church as children, which is where they learned how to harmonize. A demo tape the group assembled caught the attention of producer Teddy Riley, a former member of Guy and arguably the father of new jack swing. Prior to SWV, Riley helped establish the careers of Jodeci and Mary J. Blige. Riley's luck didn't wear out with SWV -- he helped the group craft their debut, It's About Time, which went double platinum within its first year of release. The breakthrough R&B hit for SWV was the smooth 1992 release "Right Here" this was soon to be followed up with "I'm So Into You", establishing the trio as a commercial force early in 1993. Then came two number one R&B singles in a row: "Weak" and "Right Here/Human Nature" - "Right Here" - a remix of their first single, that featured samples of Michael Jackson's "Human Nature" was an international success. The funky joint "Anything," in which the trio feature with Wu-Tang Clan was also SWV's contribution to the Movie Soundtrack "Above the Rim" and became a Top Ten R&B hit in the spring of 1994. In 1996, SWV returned with the album "New Beginning", which was preceded by the release & number one hit "You're The One". This period saw a shift in style and direction from the group, helping in pioneering the popular R&B Sound of the mid-late 1990s

You're The One - Candyman

You're The One - Swv

You're The One (Ess Eff Cee Remix) - Paul Manchin

You're The One - Paul Manchin

You're The One - Vogues

You're The One - Paul Manchin