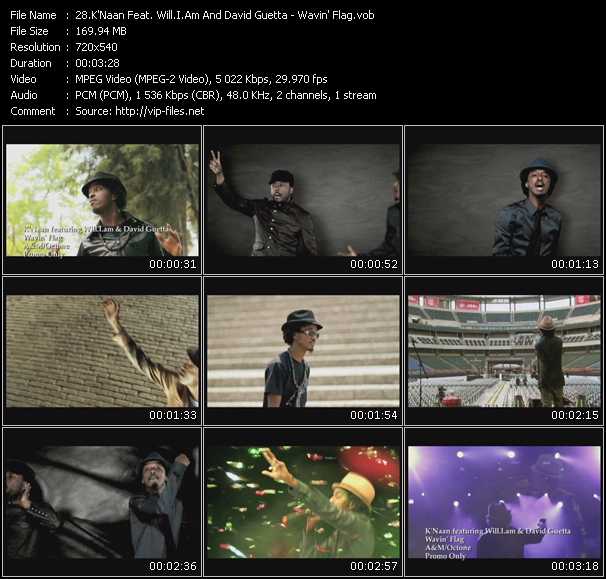 Other Pop-Music Videos of K'Naan

K'Naan Feat. Nelly Furtado video Is Anybody Out There?

Born November 7. 1967 in Paris, France. He's been a DJ at several different clubs since the early 1980's. His first album, "Just A Little More Love", was released in 2002, ten years after his first single "Up & Way". He is probably the most prominent producer of the Euro Dance revival of the late 2000s up into the 2010s, having recorded a string of highly successful commercial dance records with R&B and pop vocalists such as Kelly Rowland, Ludacris or Sia.

William Adams (born March 15, 1975), professionally known by his stage name will.i.am (pronounced "Will I am"), is an American rapper, musician, songwriter, singer, entrepreneur, actor, DJ and producer. He came to prominence in the late 1990s as a member of the hip hop group The Black Eyed Peas. Will.i.am has also released four solo albums. The first, Lost Change was released in 2001 on Atlantic Records. The album itself is the original soundtrack to the movie of the same name. A music video was made for the song, "I Am", however, no singles were released from the album. The second solo album Must B 21, was released on September 23, 2003. Track seventeen on the release, "Go!", was regularly used as the theme for the NBA Live 2005 and Madden NFL 2005 seasons. A video for the track was also recorded for use within the sports, however, no singles were released from the album. The third album, Songs About Girls, was released on September 25, 2007. The first single released from the album was a club track titled "I Got It from My Mama" which peaked on the Billboard Hot 100 at #31 on the 17th of August 2007. The album also featured singles "Heartbreaker" and "One More Chance". will.i.am is also a music producer. He has produced with other artists including Michael Jackson, Justin Bieber, Eazy-E, Britney Spears, U2, Rihanna, Usher, Justin Timberlake, Earth, Wind & Fire, Nicki Minaj, Cheryl Cole, 2NE1, SMAP, The Game, Nas, Bone Thugs-n-Harmony, Daddy Yankee, Wolfgang Gartner, and Juanes. He is a coach on The Voice UK.

Somali-Canadian hip hop artist, born 1978 in Mogadishu, Somalia. When the civil war in Somalia reached the capital Mogadishu, his parents emigrated with their 13 year old son to Harlem, New York City, before moving to Canada, to the Toronto (Etobicoke) neighbourhood Jamestown in Rexdale, joining a small Somali-Canadian community, from where he started his musical career. His aunt Magool is revered as being one of Somalia's most famous singers of all time, while his grandfather Haji Mohamed was a renown poet back in Somalia. K'naan is a Muslim and his name means "traveler" in the Somali language. K'naan became a friend and associate of Canadian promoter Sol Guy, who helped him secure a speaking engagement before the United Nations High Commissioner for Refugees in 1999, where K'naan performed a spoken word piece criticizing the UN for its failed aid missions to Somalia. One of the audience members, Senegalese singer Youssou N'Dour, was so impressed by the young MC's performance and courage that he invited him to contribute to his 2001 album Building Bridges, a project through which K'naan was able to tour the world. This project led to his work at other UN events, as well as the Montreal Jazz Festival and the Halifax Pop Explosion. It also helped him meet Canadian producer Jarvis Church and his Track & Field team in 2002, who produced his debut album The Dusty Foot Philosopher, which was released in 2005 to critical acclaim. In 2006, it won the Juno Award for Rap Recording of the Year, and was nominated for the 2006 Polaris Music Prize. It also won the BBC Radio 3 Award for World Music in the newcomer category for 2007. The Dusty Foot Philosopher was re-released and re-packaged as a "Deluxe Edition" featuring new mixes and a bonus DVD in the United States (and various international territories) by the emerging media company and record label Interdependent Media in 2008. Since then, K'naan has been on tour promoting his album and working on his follow-up release, "Troubadour," his debut album for new label, A&M Octone Records. He has also collaborated with artists like Nelly Furtado, Mos Def, Will.i.am, Roots, dead prez, and Pharoahe Monch on tours such as Live 8 and Breedlove Odyssey. He also collaborated with Damian Marley on the "Welcome to Jamrock" touring session. K'naan rose to mainstream popularity by participating in the 2008 BET Awards Cypher. This was his first appearance on American television. His second studio album, Troubadour, was released on February 24, 2009 on A&M/Octone Records, distributed through Universal Music Group worldwide. The album's first single, "ABC's", was released to radio in late 2008. K'naan has featured in several video games such as Madden NFL 09 with his song ABC's, and FIFA 06 with his song "Soobax". The song "If Rap Gets Jealous", a rerecording of a track of the same name – with different verses – from The Dusty Foot Philosopher, features Metallica lead guitarist Kirk Hammett. K'naan was also the first featured artist on X3, a collaborative project between CBC Radio 3, Exclaim! magazine and aux.tv to promote new Canadian music. In July 2010, he performed a cover of U2's "Stuck in a Moment You Can't Get Out Of" for iheartradio. A remixed version of K'naan's single "Wavin' Flag" was chosen as Coca-Cola's anthem for the 2010 FIFA World Cup also in the commercials in the pre-game, held in South Africa. In December 2009, K'naan performed the song live during the sponsor's FIFA World Cup Trophy Tour, which took him to 86 countries around the world.