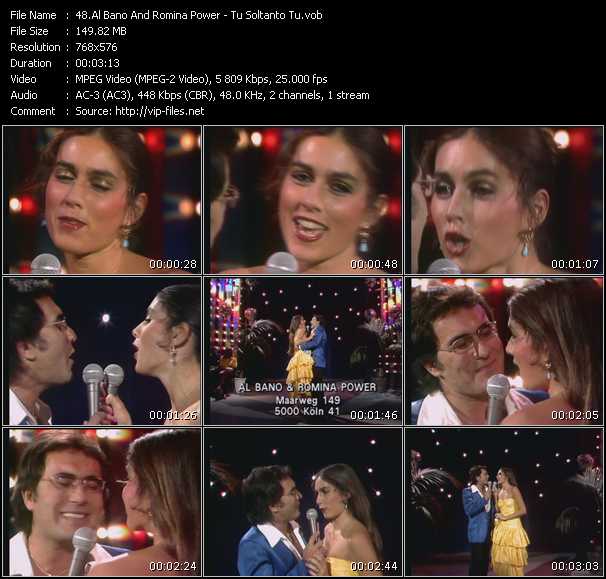 Other Pop-Music Videos of Al Bano And Romina Power

Al Bano (born May,1943 in southern Italy, precisely in Cellino San Marco, Brindisi) and Romina Power (born October 2, 1951 in Los Angeles, USA, daughter of actors Tyrone Power and Linda Christian) have been for nearly 30 years one of the most famous and successful couples of the Italian pop music. Albano known Romina in 1967 during filming the movie "Nel Sole", also the title of the first great success of Al Bano Carrisi reaching first place in the sales charts. They married in 1970, but Al Bano begins the collaboration on a permanent basis with his wife in 1974, forming together their own record label Libra. They released two singles before their first album "Atto I" in 1975. The next year the duo took 7th place in the Eurovision Song Contest with We'll Live It All Again. Several more albums interspersed with singles followed, many of which were released both in Italian and Spanish - a tradition followed by many Italian artists. The duo broke through with the release of the album "Felicità" in 1982: four tracks were on the charts at once, and the title track took the 2nd place at the San Remo Festival, where two years later will win with the song "Ci Sarà". In 1985 Al Bano & Romina Power again represented Italy at Eurovison, once again taking the 7th place with "Magic, Oh Magic". They released several more albums before parting ways in 1999. Al Bano resumed his solo carreer, while Romina tried her hand at acting and painting.