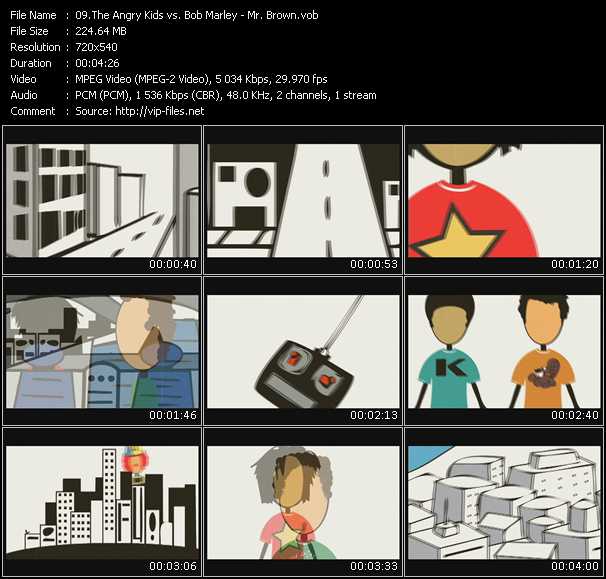 Other Pop-Music Videos of Angry Kids

Jamaican singer, songwriter and musician. Born: February 6, 1945 Nine Miles, Jamaica. Died: May 11, 1981 of cancer in Miami, Florida, USA Nesta Robert "Bob" Marley, was a Jamaican singer-songwriter and musician. He was the rhythm guitarist and lead singer for the ska, rocksteady and reggae bands The Wailers (1963-1974) and Bob Marley & The Wailers (1974–1981). Marley remains the most widely known and revered performer of reggae music, and is credited with helping spread both Jamaican music and the Rastafari movement to a worldwide audience. Marley's music was heavily influenced by the social issues of his homeland, and he is considered to have given voice to the specific political and cultural nexus of Jamaica. His best-known hits include "I Shot the Sheriff", "No Woman, No Cry", "Could You Be Loved", "Stir It Up", "Get Up Stand Up", "Jamming", "Redemption Song", "One Love" and, "Three Little Birds", as well as the posthumous releases "Buffalo Soldier" and "Iron Lion Zion". The compilation album Legend, released three years after his death, is reggae's best-selling album, going ten times Platinum which is also known as one Diamond in the U.S., and selling 25 million copies worldwide. Inducted into Rock & Roll Hall of Fame in 1994 (Performer) Inducted into Songwriters Hall of Fame in 2010.

Canadians Ryan (ry2k) Wilock, and Jeff (Beckstein) Beck, The Angry Kids are seasoned industry pros whose sample-based recordings (most notably Mr. Brown, the duo‘s much-spun spin on the Bob Marley‘s classic) spread like wildfire amongst club DJs. The group has gone on to be hired to remix such artists as 30 Seconds to Mars, Lights, and Dim Mak artist Scanners amongst others. Their debut album boasts appearances from Bob Marley (Mr. Brown), Nik Kershaw (Wouldn't It Be Good), A Flock of Seagulls (I Ran (So Far Away), The People Movers (C-Lime Woman), and original recordings to round it out. Once heralded as the best producers you never heard of, The Angry Kids have proven them self to be world class electronic artists.