James Brown video VOB How Do You Stop (From Formel Eins) 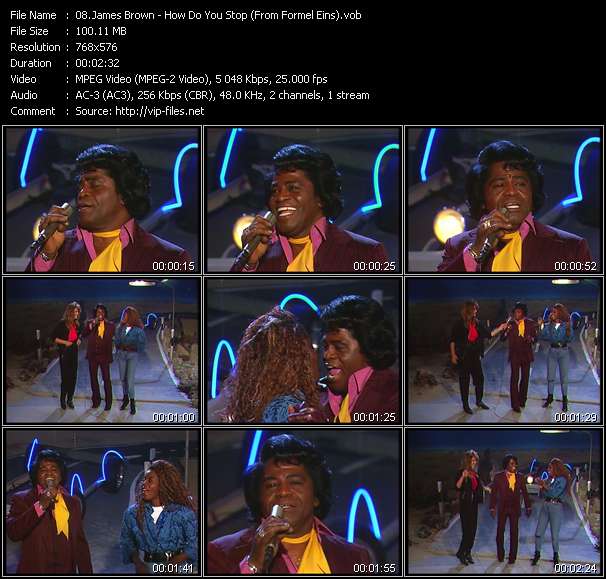 How Do You Stop (From Formel Eins)
MPEG-2 video VOB

Other Pop-Music Videos of James Brown

James Brown video I Got You (I Feel Good) (From "Good Morning, Vietnam")

James Brown video The Payback (Part 1) (From The Midnight Special)

DVD: Burt Sugarman's The Midnight Special. Live On Stage In 1974

James Brown video I Got You (I Feel Good)

American singer, songwriter, and musician. Born: 3 May 1933 near Barnwell, South Carolina, USA. Died: 25 December 2006 in Atlanta, Georgia, USA (aged 73). James Brown was raised in poverty in Augusta, Georgia. 1950s: Joined the Gospel Starlighters in 1953, a vocal quartet led by Bobby Byrd, after completing a four-year stint in prison for robbery. As Brown became the focal point of the act, the group changed its name to 'The Famous Flames' and its focus from gospel to R&B. In 1955 The Famous Flames record "Please Please Please" at the studio of WIBB in Macon, Georgia. In 1958 James Brown's first #1 hit, "Try Me", is released. It was the best-selling R&B single of 1958, and the first of 17 chart-topping R&B singles by Brown over the next two decades. 1965: Records "Papa's Got a Brand New Bag", a revolutionary single that ushers in a whole new era of soul music. Released that summer, it tops the R&B chart for eight weeks and even cracks the pop Top Ten. 1971: Signs with Polydor Records, for which he recorded extensively throughout the decade. 1974: The Payback, the most successful of James Brown's Seventies albums—many of which were double-LPs with lengthy, extended tracks—makes its debut on Billboard's album chart. It is the only gold-certified (500,000 copies sold) album of his career. 1984: Bronx DJ Afrika Bambaataa teams up with Brown to record the anthemic single "Unity". 1986: "Living In America", the theme song from Rocky IV, reaches #4 on Billboard's Hot 100 chart, becoming Brown's biggest pop hit since "I Got You (I Feel Good)" went to #3 in 1965. 1992: Receives a Lifetime Achievement Award at the 34th annual Grammy Awards. 2006: Hospitalized with pneumonia, dying on Christmas Day. Inducted into Rock And Roll Hall of Fame in 1986 (Performer). Inducted into Songwriters Hall of Fame in 2000.