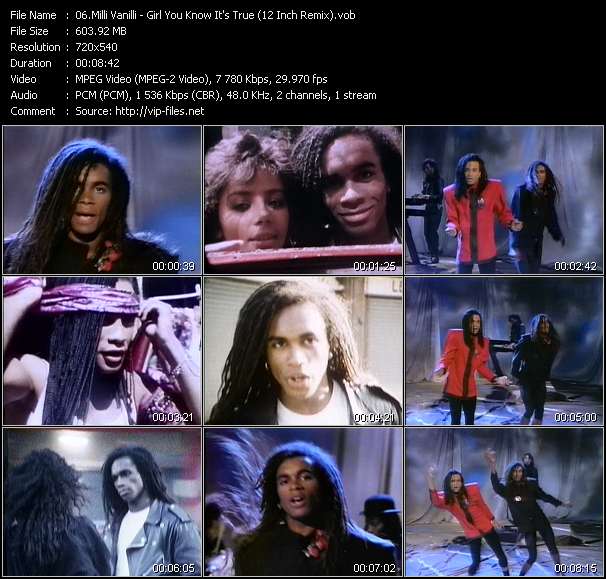 Other Pop-Music Videos of Milli Vanilli

Rob And Fab (Milli Vanilli) video We Can Get It On

Milli Vanilli video All Or Nothing (From Peter's Pop Show)

Rob And Fab (Milli Vanilli) video We Can Get It On

Pop vocal group, formed in Germany in 1988. The 'face' of the band was composed of models Fabrice Morvan and Rob Pilatus, who producer Frank Farian had chosen because he felt the real singers (Brad Howell and John Davis) were unmarketable. The duo only appeared on the album cover, and lip-synched to pre-recorded studio singers in music videos and in concert. In 1990, they were awarded the Grammy Award for Best New Artist, but later became the only act in history to have their Grammy stripped from them, when it was revealed that they had not been involved in the creation of their breakthrough album, "Girl You Know It's True". In 1993, Pilatus and Morvan released a new (unsuccessful) album as Rob & Fab, in an attempt to prove to the world that they did indeed possess vocal and writing talent. On his side, Frank Farian went on to produce The Real Milli Vanilli. In 1998, Rob Pilatus was found dead in a hotel near Frankfurt.

Girl You Know It's True (The Dome Chartparty Live) - Oli.P

DVD: Best Of The Dome Vol.1