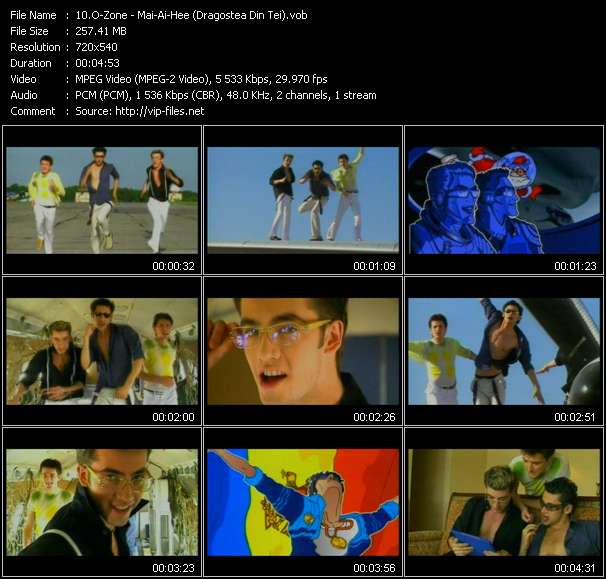 Other Pop-Music Videos of O-Zone

In January 1998 Dan changed the music style of "Inferialis" to pop-rock but soon he realized that he needed to leave this type of music for a while, due to the fact that rock was not a popular music style at that time, but he always knew that he would return to the rock style at some point. His first song "De La Mine" was released the same year in October; and was soon followed by the biggest hit of 1999 in Moldova - "Dar, Unde Esti". But Dan wanted to get a boy band together, since they were very popular in that time. So in September 1999 Dan formed "O-Zone" the first boy band in Moldova. The group was Dan Balan and Petru Jelihovschi (who was the lead singer from the band "Inferialis". In Autumn that year, the two went to Romania and recorded three songs: "Timpul Trece Fara Noi", "In Doi" and "M-as Trezi". The first single they released was "Timpul trece fara noi", and in a couple of months "O-Zone" became the number one band in Moldova. In June 2000 they released the first "O-Zone" album called "Dar, Unde Esti'" made up with 11 songs all composed and preformed by Dan. The album had a huge success with even singles becoming mega-hits including "Fiesta de la noche", "Crede-ma", "Te voi jubii", "Ciao bambina", "In doi'", "Dar, unde esti", "Tripul trece fara noi". The same year in summer O-Zone started the first tour in Moldova. In December Dan wrote a Christmas song called "Sarbatorile de iarna" for the Christmas release of the "Tanti Ludmila Show". Since then this song has become a national song for Christmas and New Year Festival and was played everywhere during this period in Moldova. In spring 2001 Dan decided to go to another level and chose the Romanian market. However his partner Petru was not so interested about Dan's big plans, he thought of his performance in the band more as a hobby. So Dan needed to find someone else who was as serious about this as he was, so Dan and Petru split up but remained friends. The new O-Zone lineup : Dan Bălan, Radu Sârbu, and Arsenie Todiraş (aka Arsenium). Originally from Moldova, the band launched in Romania. They mainly played EuroDance music and are famous for the single "Dragostea Din Tei", which was also performed by Haiducii, a notable summer hit which reached Number 1 in the singles charts of many countries during 2003 and 2004, and Number 3 in the United Kingdom. The follow-up single "Despre Tine" had similar success across Europe. In 13 January 2005 the group split up. All of the members went their separate ways and started their own solo careers.