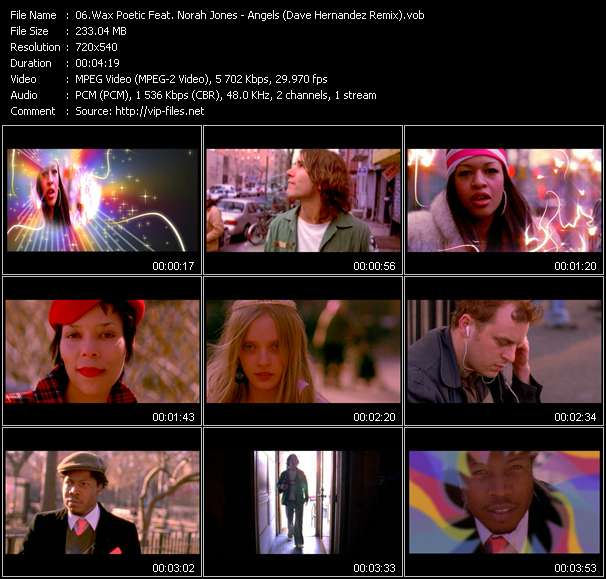 Other Pop-Music Videos of Wax Poetic

Norah Jones (born Geethali Norah Jones Shankar; March 30, 1979) is an American singer-songwriter, pianist, and actress. She is the daughter of Indian sitar player Ravi Shankar and Sue Jones. She is also the paternal half-sister of Shubho Shankar & Anoushka Shankar. In 2002, she launched her solo music career with the release of the commercially successful and critically acclaimed album Come Away with Me, a fusion of jazz, pop, and country music, which was certified diamond album in 2002, selling over 26 million copies, The record earned Jones five Grammy Awards, including the Album of the Year, Record of the Year, and Best New Artist. Her subsequent studio albums, Feels Like Home, released in 2004, Not Too Late, released in 2007, the same year she made her film debut in My Blueberry Nights, and her 2009 release The Fall all gained Platinum status, selling over a million copies and were generally well received by critics. Jones' fifth studio album, Little Broken Hearts was released on April 27, 2012. Jones has won nine Grammy Awards and was Billboard magazine's 60th-best-selling music artist of the 2000–2009 decade. Throughout her career, Jones has won numerous awards and has sold more than 16 million albums in the U.S and over 36 million records worldwide. Billboard named her the top jazz artist of the 2000–2009 decade, establishing herself as one of the best-selling artists of all time.

Angels (Live Is The Answer) - Morandi

DVD: Robbie Williams. In And Out Of Consciousness. Greatest Hits 1990-2010