John Cougar Mellencamp video VOB Get A Leg Up 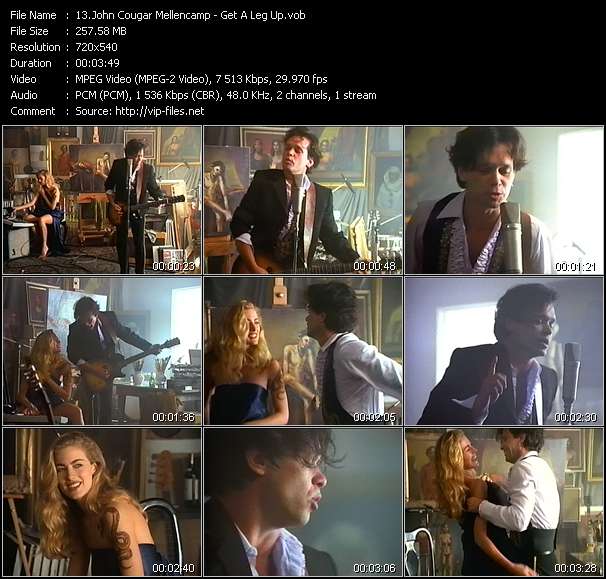 Get A Leg Up
MPEG-2 video VOB

John Mellencamp was born in Seymour, Indiana on October 7, 1951. He started out for a brief period of time as a glam rocker, but then tried out for a solo career with his first album Chestnut Street Incident released by former David Bowie manager, Tony DeFries on the Mainman (division of MCA) label. That album was a complete flop partly due to the fact that the record label wanted to mold John into something he was not (a pretty boy ala James Dean) and the fact that the album mostly consisted of cover songs. It was also the label's idea to release the album under the name Johnny Cougar which Mellencamp did not approve of. It wasn't until the release of American Fool, released this time under the moniker John Cougar, which featured his most well-known hit to date, "Jack & Diane" that he really made it big; the album stayed at #1 on the charts for nine weeks. Following that was Uh-huh which would be his first release under the moniker John Cougar Mellencamp; the name he would stick by until he gradually dropped the "Cougar" and just went by his given name John Mellencamp. A heart attack in 1994 prevented him from touring for one of his most famous albums to date Dance Naked. John has collaborated with Me'Shell Ndegeocello and India Arie over the years. Inducted into Rock And Roll Hall of Fame in 2008 (Performer).