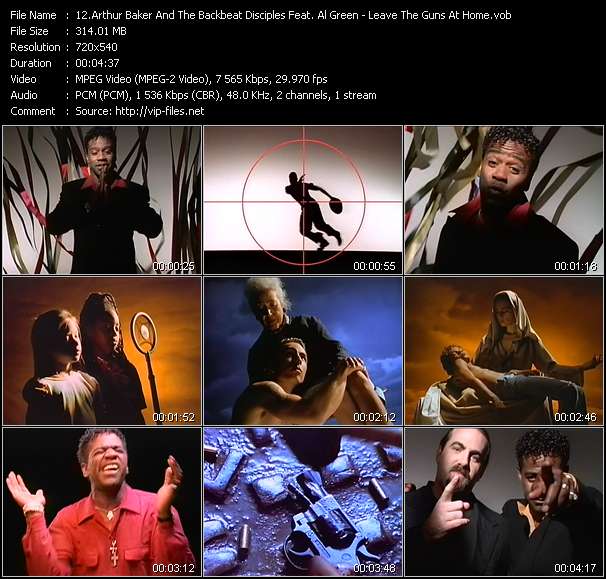 Other Pop-Music Videos of Arthur Baker

Arthur Baker And The Backbeat Disciples Feat. Shirley Lewis video It's Your Time

Highly influential producer/dj/remixer/musician, born April 22, 1955 in Boston, Massachusetts. He is best known for his work with artists such as Afrika Bambaataa, Planet Patrol, and the British group New Order. Baker began working as a DJ in Boston in the mid 1970s, where he played early disco and soul for the early Boston club scene alongside famed local DJs including John Luongo and Jimmy Stuard. He had little patience for DJing, saying in an interview: "[If] I didn't get a good reaction on a record, I'd just rip it off, break it up and throw it on the dancefloor." In 1977 he turned to production with the Hearts Of Stone project, released on the Canadian Disco 1 label. He also was part of the group North End in Boston, releasing two well-regarded 12"s, respectively on West End and Emergency Records. In 1981, Baker moved to New York, where he continued as a producer, working with Michael Jonzun and Maurice Starr on several releases for the Posse Records label. He also worked with Joe Bataan, Larry Wu, Tom Moulton, Jo Bisso, and his then wife Tina B by the start of the 1980s, which would be his most prolific and influential decade of work. He was especially well known for his association with The Latin Rascals who did edits on many of Baker's productions through the 1980s, including Hall and Oates and The Rolling Stones. He went on to produce for Tommy Boy Records, where he produced Afrika Bambaataa & Soulsonic Force's "Planet Rock" single, which was a hit in the summer of 1982. The record combined elements from two Kraftwerk recordings, "Trans Europe Express" and "Numbers," which were interpolated by studio musicians, rather than sampled. From the groundbreaking electro recorded at the same session, he produced Planet Patrol's "Play at Your Own Risk" single in 1982, another Tommy Boy group that hit big in 1983, establishing a major precursor to freestyle and "urban contemporary" music that was to come. Also during 1982, he produced the single "Walking on Sunshine" by Rockers Revenge featuring Donnie Calvin which hit number one on the U.S. Dance chart on September 18 that year. Baker launched his first record label Streetwise in the same year. Later labels including Criminal Records and Pow Wow, as well as Baker's Shakedown Studios, would soon follow. In 1983, Baker found work doing dance remixes of pop and rock hits, first with Cyndi Lauper's "Girls Just Wanna Have Fun," and Bruce Springsteen's "Dancing in the Dark," "Cover Me," and "Born in the U.S.A." from his Born in the U.S.A. album. In 1984, Baker contributed his "Breakers' Revenge" to the Beat Street score and movie soundtrack, which he also helped produce. The infamous and much sought after Remixes for Pet Shop Boys´ "Suburbia" followed in 1986 which happens to be the birth year of Hurts lead singer Theo Hutchcraft with a notable collaboration in 2011 ("Wonderful Life"). Following these successes, Baker came to the attention of British alternative dance group New Order, which asked him to produce its songs "Confusion" and "Thieves Like Us" (and Baker can be seen prominently in the music video of the former). The 12-inch single "Confusion" was a crossover hit on the U.S. dance charts, and established a relationship between Baker and the band that has continued for more than 20 years. This also set a precedent for rock-style bands to produce dance records and remixes, which have now become commonplace. Narrowly missing out on signing the Beastie Boys to his Streetwise label, Baker did manage to sign the group New Edition, which had success with its single "Candy Girl." In 1984, the New York-based Baker worked with Philadelphians "Hall & Oates" as mix consultant on their album Big Bam Boom, and the result was a markedly urban and electronic sound for the duo. Baker co-wrote the opening instrumental, "Dance On Your Knees," with Daryl Hall. He also remixed that song and the album's other three chart hits: "Out Of Touch," "Method Of Modern Love," and "Possession Obsession." In 1985, Baker helped Bob Dylan complete his Empire Burlesque album as mixer and arranger, and with Little Steven organized and produced the anti-apartheid anthem "Sun City" by Artists United Against Apartheid. In the late 1980s and later into the 1990s, Baker worked with soul star Al Green, writing and producing the international hit "The Message is Love" and the anti-handgun song "Leave the Guns at Home". In 1989 he released the album Merge on A&M Records as Arthur Baker And The Backbeat Disciples, and remixed Neneh Cherry's debut single Buffalo Stance. He was also the music supervisor of the films Fried Green Tomatoes and Listen Up - The Lives Of Quincy Jones. In the 1990s, following a break from production for some years, Baker moved to London, and established a chain of successful bars—The Elbow Rooms—across the city. He also owns the Tiny Robot restaurant and The Starland Social Club members bar in London, located in Notting Hill. He continues to work as a DJ and producer and recently produced "Part-A" for the genre-busting London Electro Metal band Monsta. In 2006, the financial services company Visa used a Baker-produced track from Afrika Bambaataa's "Looking For the Perfect Beat" as the backing music of a Visa Check Card commercial. In the ad, an animated worm drawn on the pages of a checkbook does the 1980s dance known as the Worm.

Soul/gospel singer and songwriter, born 13 April 1946 in Forrest City, Arkansas, USA. He started his career as Al Greene but has used the name Al Green since the late 1960s. Al Green has also been a pastor at Memphis' Full Gospel Tabernacle since 1976. Inducted into Rock And Roll Hall of Fame in 1995 (Performer). Inducted into Songwriters Hall of Fame in 2004.