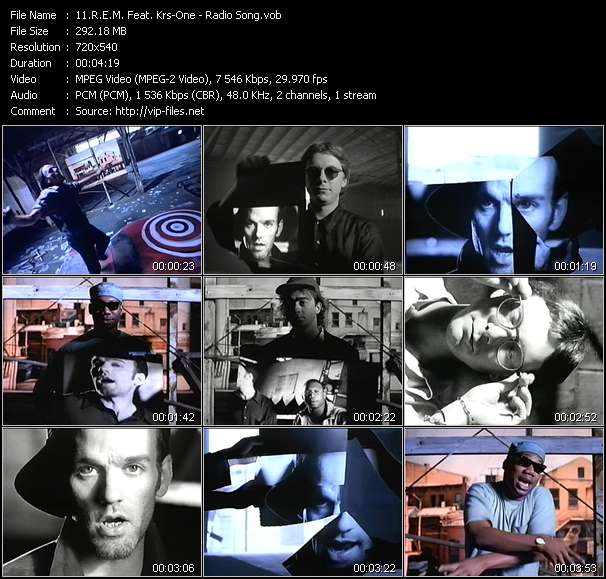 Other Pop-Music Videos of R.E.M.

R.E.M. video Man On The Moon

R.E.M. video The One I Love

Lawrence Parker (born August 20, 1965 in Brooklyn, NY, United States), better known by his stage name KRS-One, is an American MC and producer. His name is an acronym of "Knowledge Reigns Supreme Over Nearly Everyone". Originally a Graffiti Artist, he designed the logo for B-Boy Records who released his first recordings. Over his career, he has been known by several pseudonyms including "Kris Parker," "The Blastmaster," "The Teacha," and "The Philosopher." At the 2008 BET Awards, KRS-One was the recipient of the Lifetime Achievement Award for all his work and effort towards the Stop the Violence Movement as well as the overall pioneering of hip-hop music and culture. His wife is G. Simone.

R.E.M. (Rapid Eye Movement) was an American rock band from Athens, Georgia, formed in 1980 by singer Michael Stipe, guitarist Peter Buck, bassist Mike Mills, and drummer Bill Berry. One of the first popular alternative rock bands, R.E.M. gained early attention due to Buck's ringing, arpeggiated guitar style and Stipe's unclear vocals. R.E.M. released its first single, "Radio Free Europe", in 1981 on the independent record label Hib-Tone. The single was followed by the Chronic Town EP in 1982, the band's first release on I.R.S. Records. In 1983, the group released its critically acclaimed debut album, Murmur, and built its reputation over the next few years through subsequent releases, constant touring, and the support of college radio. Following years of underground success, R.E.M. achieved a mainstream hit in 1987 with the single "The One I Love". The group signed to Warner Bros. Records in 1988, and began to espouse political and environmental concerns while playing large arenas worldwide. By the early 1990s, when alternative rock began to experience broad mainstream success, R.E.M. was viewed by subsequent acts such as Nirvana and Pavement as a pioneer of the genre and released its two most commercially successful albums, Out of Time and Automatic for the People, which veered from the band's established sound. R.E.M.'s 1994 release, Monster, was a return to a more rock-oriented sound. The band began its first tour in six years to support the album; the tour was marred by medical emergencies suffered by three band members. In 1996, R.E.M. re-signed with Warner Bros. for a reported US $80 million, at the time the most expensive recording contract in history. The following year, Bill Berry left the band, while Buck, Mills, and Stipe continued the group as a trio. Through some changes in musical style, the band continued its career into the next decade with mixed critical and commercial success. In 2007, the band was inducted into the Rock and Roll Hall of Fame. R.E.M. disbanded in September 2011, announcing the split on its website.