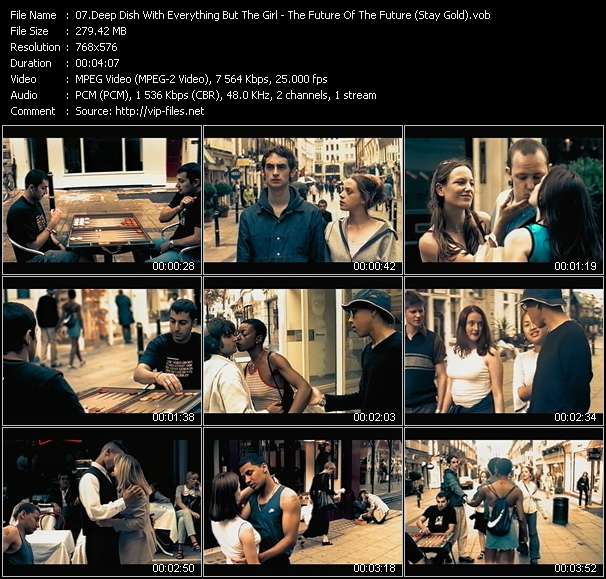 The Future Of The Future (Stay Gold)
MPEG-2 video VOB

Other Pop-Music Videos of Deep Dish

Deep Dish With Everything But The Girl

Deep Dish are the duo of Dubfire and Sharam. Originally from Iran, they took root in the Washington, DC area in the early 90's. They run Deep Dish Records, Yoshitoshi Recordings as well as its sister labels Shinichi and Yo!.

Tracey Thorn and Ben Watt first emerged as pioneers in the lite-jazz music scene in the early 1980's. They continued to refine their jazz versus electronica sound through eight studio albums until they gained larger exposure in 1994 through a collaboration with Massive Attack on "Protection" and their hit album "Amplified Heart." The Todd Terry remix of "Missing" was a smash hit in 1995 and continues to be remixed and played to this day. After the success of "Missing", the duo took their music in a more beat-oriented and clubbier direction, with Tracey lending her vocals as guest singer on several club tracks by Deep Dish and others. Their latest musical outing was a volume in the DMC "Back To Mine" series in late 2001. The duo got their name from a furniture store ad which proclaimed, "For your bedroom needs, we have everything but the girl."